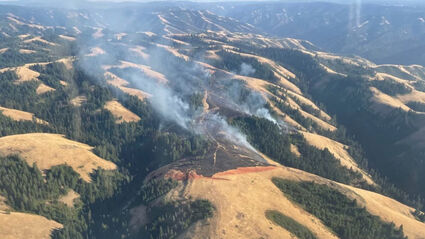 PENDLETON–Approximately 21 new fires have been detected across the Umatilla National Forest following thunderstorms the past few days. Significant lightning activity occurred across much of the Forest, with multiple new incidents across the Blue Mountains reported to the Blue Mountain Interagency Dispatch Center (BMIDC) and John Day Interagency Dispatch Center (JDIDC). More smoke reports are expected throughout the next few days as weather conditions continue to stay hot and dry, according to the USFS.

Columbia County Fire District No. 3 responded to a report of smoke spotted in the mountains southeast of Dayton, according to Jeromy Phinney, Chief. It was determined that the smoke was outside District 3 boundaries and Forest Service resources were called, Phinney said.

USFS resources responded and extinguished a single tree, Phinney noted. A District 3 fire fighter was dispatched to assist, he said.

Local initial attack resources have been busy responding to these incidents. Most of the fires are staffed and remain small, less than one acre in size. Fire crews will monitor these fires and continue to watch for additional starts.

The Walla Walla Ranger District received the most significant fire activity with 12 new fires reported. The largest of these fires, the Rattlesnake Ridge Fire, is approximately 95 acres in size and located 26 miles east of Pendleton, Ore. The fire was reported on Aug. 22 at 7:40 a.m. and is burning in rugged terrain with grass and timber. Due to the difficult terrain, access to the fire is limited. Aerial resources were crucial yesterday in slowing the fire's spread until firefighters could arrive on the ground. The fire was staffed yesterday afternoon with eight smokejumpers and an engine from the Bureau of Indian Affairs.

The fire's behavior was listed as moderate Tuesday, primarily consisting of creeping and smoldering with pockets of heavier fuels burning more actively within the fire perimeter. Smoke may be visible throughout the day. Firefighters will focus on securing containment lines, where terrain and fuels allow for crews to safely engage, while utilizing aircraft to slow fire spread and cool hotspots within the fire perimeter. Additional resources are arriving today, including the Umatilla Veterans Crew, an interagency hot shot crew, a dozer, a water tender, and four engines. The fire is currently 30% contained.

Hot and dry conditions are expected to persist throughout the week. Fire officials want to remind everyone that the current fire danger rating remains at HIGH and Public Use Restrictions involving chainsaw use are in effect.

For more information regarding Restrictions, please contact the Umatilla National Forest information hotline at (877) 958-9663. The latest fire information will be posted on the Blue Mountains Fire Information Blog at http://bluemountainfireinfo.blogspot.com/.

More information about the Umatilla National Forest is available at https://www.fs.usda.gov/umatilla.