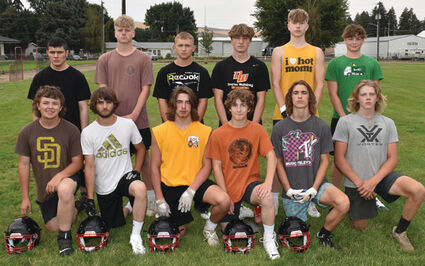 These dozen Dayton-Waitsburg Wolfpack football players will be the nucleus of the 2022 football campaign's possibilities for success as workouts at DW's Waitsburg football field got going recently. Head Coach Troy Larsen has confidence that these experienced teammates that are among almost 30 turning out for football will play a key role in the Wolfpack being competitive this season. "Coupled with a season under their belts," Larsen commented, "the team is way ahead of last year and excited about the season." Senior and All-Conference Safety and Quarterback Monte Pettichord, back row, fourth from left, will play a big leadership role, Larsen said, along with "explosive All-Conference running back Hudson Reser," (front row, fourth from right) also a senior. Front row, left to right: Garrett Palmer, Levi Boudrieau, Cyson Morris, Hudson Reser, Dylan Marlow, Kason Fortune. Standing: Isaac Conover, Jayce Gleason, Kaylub Prather, Monte Pettichord, Blake French and Lucas VanHoose. The Wolfpack will compete in the Ritzville Jamboree this weekend then kick off the season with a home contest against Granger Friday, September 2.