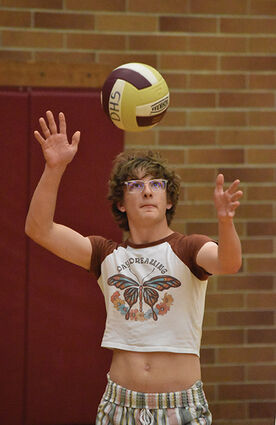 Football opponents can't catch him on the gridiron, but the Chronicle lens happened to catch Dayton-Waitsburg Wolfpack running back Hudson Reser, appropriately garbed for Homecoming Week's traditional Stud Volleyball tournament, which followed the DW Volleyball Match last Thursday. The short-handed Senior Class team held its own against opponents from the freshman, sophomore and junior classes, all part of the fun distractions that make up Homecoming at Dayton High.

Superintendent Rich Stewart announced during his report the end of the COVID shot requirements for schools and the trial of new key card door security system.

Board Chair Jeff McCowen announced two additions to the agenda, one for an executive se...