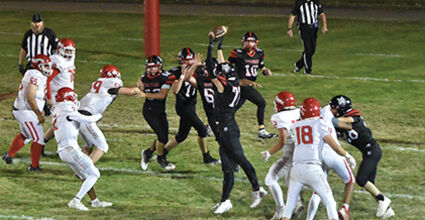 WAITSBURG–A thrilling goal-line stand in the second quarter with the Dayton-Waitsburg Wolfpack leading 16-0 broke the White Swan Cougars' spirit and the local team went on to celebrate a 53-8 homecoming win here September 23.

"It could have been a 16-8 game with momentum with White Swan," commented Head Coach Troy Larsen, "but it turned out to be a 16-point swing with the long drive and fresh...