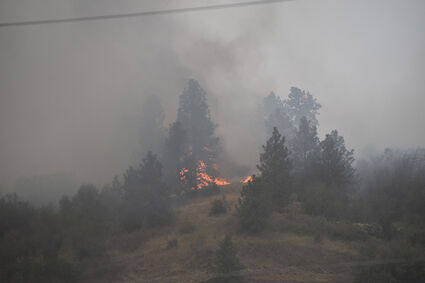 A finger of fire found its way over the edge of the hillside that overlooks the Touchet Valley Airport as fire trucks from Columbia County Fire District No. 3 responded to a mutual-aid call from Joint Fire District No. 2 on Friday, October 21. It was a controlled burn that got out of control and blackened some 150 acres. The fire started at Gallaher Road and Lower Hogeye Road and was pushed eastward by wind, according the Jeromy Phinney, Chief of District 3. Flames followed a draw full of brush and grass and moved on to the hillside of wheat stubble. Fire crews were able to contain the fire before it escaped the field's perimeter, Phinney said.