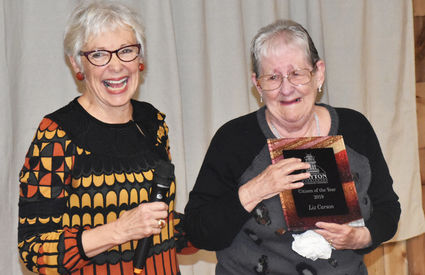 Citizen of the Year Liz Carson was overwhelmed when honored for her diligent work as unofficial historian for the community. The award was presented by Ginny Butler.

DAYTON–People with a passion for their community were recognized when the Chamber of Commerce here presented its annual awards to deserving members of the community at its 73rd Annual Awards Banquet, held at the Fairgrounds Pavilion November 7.

Citizen historical archivist Liz Carson was rendered speechless when she was named Citizen of the Year by presenter Ginny Butler. "Now that I'm calmed down," Carson informed the Chronicle the next day, "I just wanted the people to know I do appreciate the honor. It blew me away."

"Having been born and raised here, I'm very proud of Dayton and it's very fantastic," she said.

Carson was likened to "The History Channel" for Blue Mountain Heritage Society, the Palus Museum, and "decades of her life" dedicated to researching and documenting Columbia County history. "Her work spans over 100 years and includes voluminous amounts of Columbia County Family History, Veterans' history, Dayton history and more," said Butler. "She is truly a wealth of knowledge and an excellent resource."

There are over 50 volumes of county families, schools and little-known trivia documented by Carson, done voluntarily without compensation, and she is eager to assist any request for information. Her binders are clearly labeled and available for public use on the Heritage Society's website.

Sabin's Auto and owner Rick Sabin was named Business of the Year.

"This town has been really good to me," Sabin said. "I thank every one of you, but part of this goes to Rick Nettleton. He's been with me for 20 years."

Sabin's Auto has been a steady, reliable fixture on West Main Street, and Sabin, nominees said, is "thoughtful and honest and an exceptional business owner who does right by his customers.

"Dayton is blessed to have this business owner on our Main Street for 20 years, supporting not only his family but also two employees and their families," said presenter Candy Jones.

Thirty-year City Lumber employee Mauricio Ramos was honored as Employee of the Year.

Ramos "is a friendly face who's been a staple in this community for decades," one nominator wrote. "You've probably encountered this individual when you needed help with building materials, fixing windows or painting your house," said presenter Jeannie Lyonnais.

"This outstanding person not only works hard for his employer, but he also runs his own small business-a much-needed roofing company," she said. "And he's a family man, having raised successful children and grandchildren." Ramos was also noted for volunteering his time and services.

The Youth Citizen of the Year was Tayven Seney, son of Byron and Kim Seney of Dayton, and presented by proud grandmother and long-time Chamber member Bette Lou Crothers.

Seney is seen as a student leader on the sports field and was team captain in three sports. He is president of FFA and ASB treasurer. Seney is president of D.H.S. National Honor Society, always listed on the Honor Roll and devotes volunteer time to Kiwanis, Lions and Booster Club. 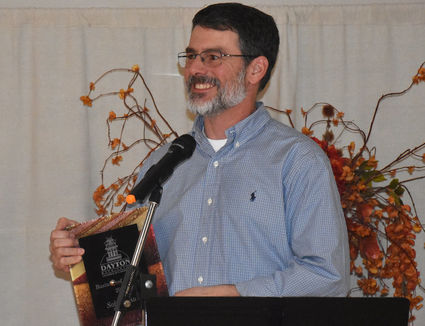 Business of the Year honors were bestowed upon Rick Sabin of Sabin's Auto.

He sets an example for other students, Crothers said, and is described as intelligent, visionary, honest, well-mannered, hard working, selfless, humble, kind, and has a "great sense of humor and is a true pleasure to be around."

Seney's generosity shows his appreciation for Dayton. This year, he donated a portion of his animal-sale proceeds to the Friends of the Fairgrounds.

Kathy Berg was the recipient of a Certificate of Appreciation for her nearly 20 years of community service and volunteerism to the community, City of Dayton and Chamber of Commerce.

The Dayton Historic Preservation Commission Chairman Mike Smith recognized Jonathan Fletcher for preservation of the 1885 Nilson House. Mark and Vonda Anderson were honored for the restoration of 358 E. Main, the Columbia Chronicle building, which now serves as a long-arm quilting business and residence.