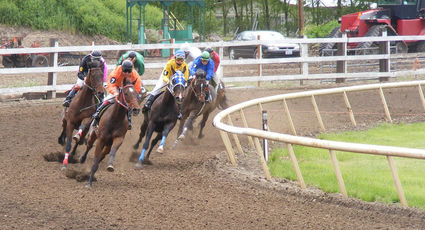 DAYTON–Members of the Dayton Days, Inc. organization and those in the community interested in the organization's future should attend a General Membership Meeting, set for 6:30 p.m., Monday, November 25, at the Columbia County Fairgrounds Youth Building.

Dayton Days Inc. reconstituted about a year ago after several years in dormancy. The group started making an effort to explore the potential to bring back horse racing, or, in the absence of that possibility, sponsor an event to give Dayton Days weekend visitors a reason to stay and enjoy activities at the Fairgrounds.

To create a "Dayton Days" community event, the organization sponsored a rodeo at the Fairgrounds during last May's Memorial Day Weekend. The corporation collaborated with the Columbia County Fair Board to enable insurance coverage for the event. The Chamber of Commerce organized and conducted the parade as it has done since racing stopped in 2011. Fair Hostesses graciously served as royalty for the rodeo event, hosting a Queen's Luncheon after the parade.

Discussion regarding plans for the 2020 Memorial Day event included the potential for sponsoring an Indian Relay and holding another rodeo.

A motion to pursue organizing an Indian Relay meet did not carry. A motion to put on another rodeo also was voted down 6-5.

Further discussion indicated a need for a General Membership Meeting and a date was set.

The financial report indicated that there is $4,998.35 in the checking account and over $4,000 in a money market account, according to treasurer Melissa Hansen.

New officers were elected in January. President is Tim Donohue; vice president is Loyal Baker; secretary is Kathy Arnzen, and Hansen is treasurer. Board members are Dewey Bell, Wayne Bell, Tim Quade and Mike Lydon. Quade and Lydon were appointed to the board in January.

During the spring months, officers and board members pursued contacts with legislators, including Rep. Bill Jenkin, R-Prosser, and Rep. Skyler Rude, R-Walla Walla, to see about funding for horse racing.

At the same time, the group opted to hold a rodeo on Memorial Day Weekend, and contracted with Bar X Ranches to put on the event.

Efforts have also investigated the potential of hosting an Indian Relay, and the Memorial Day Weekend date would give relay teams a venue to start the circuit.