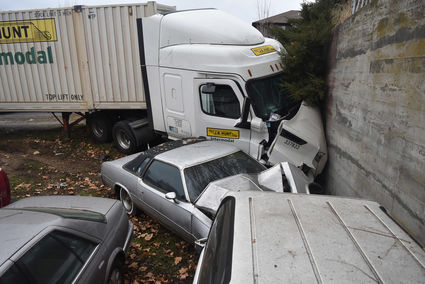 The driver of this semi received injuries and was transported to Dayton General Hospital after the semi truck and trailer he was driving veered into parked cars, striking nine, before coming to a stop at the retaining wall by Goff's Used Cars.

DAYTON–A Post Falls, Id., truck driver was injured when the 2020 Freightliner semi truck and trailer he was driving veered off Main Street, struck a parked car, went through the intersection at 4th Street, and struck several cars before coming to an abrupt stop against a concrete retaining wall by Goff's Used Cars Monday, November 18,.

Mark J. Diefenderfer, 55, was transported to Dayton General Hospital with injuries after allegedly falling asleep, according to the Washington State Patrol. Diefenderfer was charged with Negligent Driving 2nd Degree. 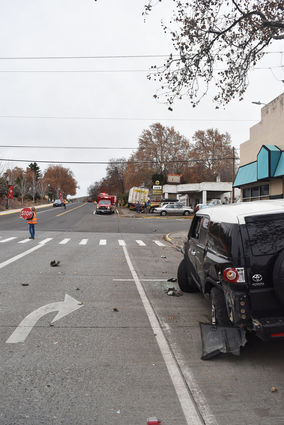 The 2020 Freightliner glanced off this parked 2014 Toyota and struck eight other cars before colliding with a retaining wall.

The Freightliner was eastbound on SR 12/Main Street as it approached 4th Street in downtown Dayton, first sideswiping a 2014 Toyota FJ Cruiser parked in the 400 block. It proceeded through the intersection, striking the stop sign and street sign, and seven other vehicles in Goff's parking area.

One vehicle was pushed into a supporting piller for the building's drive-through cover.