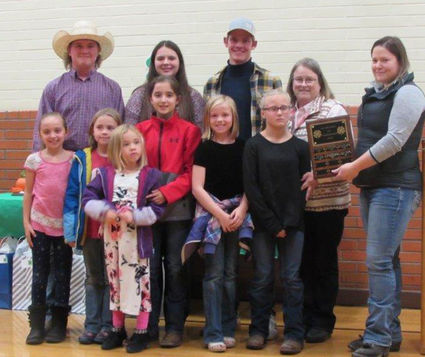 DAYTON–This year was the 100th year of 4-H in Columbia County, making the program's Achievement Night November 3 that much more special.

"Can you imagine what it must have been like 100 years ago?" asked one of the presenters, Dakota Buman, during introductory remarks. "I'm sure there were cows and sheep and the like, but robotics, microwave cooking and computerized quilting machines? My, how some things have changed, and, my, how some things never change."

4-H is about "the people, the experiences, the life-long skills, the memories, the County Fair; it's about being a role model, giving back and 'Making the Best Better,'" Buman said. "Columbia County 4-H is a tradition, a 100-year tradition. We've all heard of it, many have experienced it and tonight we are celebrating it."

4-H Camp Counselors and Counselors-In-Training were introduced by Emmalee Davis, 4-H Camp Board Member. Columbia and Garfield counties collaborate to hold the annual camp at Camp Wooten in June, she said, crediting the camp's success to its teen camp counselors who set up, assist with classes and activities, oversee cabin duties and tend to younger campers' needs all while serving as role models to younger 4-H members.

Project medals are awarded to 4-H members who have shown outstanding accomplishments in a project, community service and personal growth.

Demonstrations and Illustrated Talks are valuable learning tools that give members the experience and ability to speak and present ideas before a group.

Keeping records helps 4-Hers track projects to evaluate what has been learned and see important financial information.

Husband-and-wife team of 4-H leaders Jeff and Dina Jenkins were recognized as the 2019 Outstanding 4-H Leaders for Columbia County.

The Jenkins were recognized for their "commitment to the youth of Columbia County and for their selflessness in promoting a program they feel is important to today's youth," said 4-H Coordinator Donna Hanger.

The couple started as project leaders in one of the county's largest 4-H clubs, serving as club leaders of the Marksmen 4-H Club for the past seven years. In addition, they organize and facilitate the 4-H Food Booth at the Fair. Through this, young 4-H members get experience in handling money, working with the public and performing community service.

"Jeff and Dina are only a phone call away when an extra hand is needed within our 4-H Community and our local community," Hanger said.

Local veterinarians Kennie and Chuck Reeves were honored with the Friends of 4-H Award, bestowed by the Leaders' Council and presented by Sara Fortier. The Reeves's, Fortier informed the audience, "are both citizen leaders of our community, involved in civic community groups and the 4-H Community. They are always willing to lend a hand where they feel it's needed, and when asked."

The Cattlemen's Award was presented by Rick Turner, a member of the Columbia County Livestock Association, to Dan Magill-Katsel and Cindi Howard, for their Top Beef Projects, which judged the member on his or her project records, scope of the beef project, and the member's involvement in their club and fair activities.

"This year's selection was difficult as new, young members are joining the beef program and they are competing against the older members, which is a difficult task," Turner said. "The selection committee had a hard time placing one beef member above the rest; so, it was decided to reward a junior member and an advanced member."

The Top Project by a Junior 4-H Member, a traditional award presented by the Patit Valley Grange, represented by Neita Stearns, was awarded to Jemma Anderson for her horse project.

Anderson, according to her club leader, "has improved so much and with a smile on her face," Stearns said. Anderson has learned to be patient, work consistently on project objectives and to work hard to accomplish what is asked of her. "She cares about her project animal and sees that it is taken care of and is 'in tune' with its sometimes off-beat attitude," Stearns said. 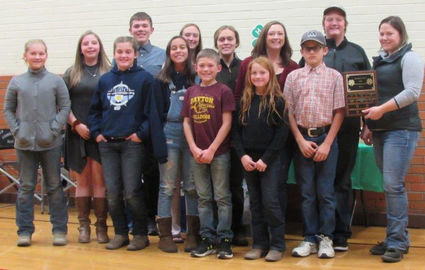 "She is a very enthusiastic and motivated young lady who takes anything she does very seriously, and with a great attitude," Stearns said.

The Top Project by an Intermediate 4-H Member, presented by the Columbia County Deputy Sheriff's Association, was Mason Garcia for his swine project.

Garcia "works to be 'his best' in his project, said presenter Kennie Reeves. "His leader says he has had several obstacles this year and took on a lot of responsibility, not only with his own project, but helping out an injured younger member's project until he was able to proceed on his own.

"This member has learned to be resilient and work out obstacles to achieve his goals," Reeves said. "This member has stayed positive with a great attitude. He is always willing to help and goes out of his way to make sure everything gets done."

The Top Senior Project was presented to Shaelyn Fortier and Alex Jenkins. The award was presented by Tracy Hanger on behalf of Portland General Electric and Archer Farms.