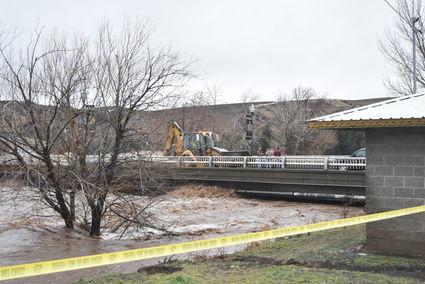 DAYTON–Several days of steady precipitation and a warming trend swelled the Touchet River and Patit Creek, prompting Columbia County and City of Dayton officials to declare an emergency to cope with the high, fast-moving streams.

There was flooding in some low-lying areas in Dayton, particularly along the Patit.

The Touchet River was out of its banks on the north and south forks above Dayton, and between Dayton and Waitsburg and beyond.

Dozens of volunteers mobilized to fill and place sand bags. As of Friday morning, areas being sandbagged were:

County Commissioners held an emergency meeting Thursday afternoon and again at 7 a.m. on Friday, declaring a state of emergency at the meeting. County offices, except for Emergency Management and Public Works, were closed.

City Council convened an emergency meeting at 2 a.m. and declared a state of emergency at 2:14 a.m., said Zac Weatherford, mayor.

Hydrologists in contact with Columbia County forecasted that the Touchet River would crest at around 9 or 10 a.m. on Friday, February 7, said County Commissioner Ryan Rundell.

A low area of about 40 yards, in the vicinity of North Cherry Street, showed water lapping at its edge and county resources were deployed to shore up the area in the event water continued to rise. Several dump truck loads of rock were deposited to create a berm to hold back potential flooding. 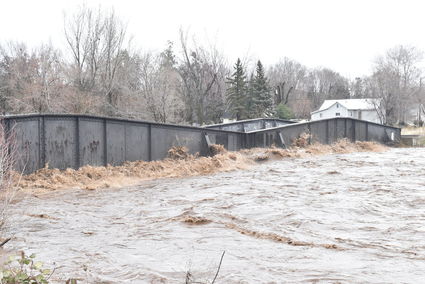 The rail road bridge, about 50 yards downstream from the Main Street Bridge, indicated when flow surges moved through by showing a burbling where the water struck the structure. At one point, a tree with root ball was lodged across the bridge. A couple hours later, it had been dislodged and continued downstream.

The South Touchet River was out of its banks in numerous locations, and blocking both the Harting and Pettijohn grades.

The Nolan Empe orchard on the North Touchet was hit hard by flood waters.

Highway 12 was closed from Waitsburg due to the Touchet River going out of its banks at the Lewis and Clark Trail State Park, and at the east portions of Preston Avenue/Highway 12 in Waitsburg, where it was crossing the roadway at several locations.

Water flowing in the valley bottom east of the State Park had washed out a small section of railroad ballast and was flowing under the ties and rail. Rail Operator Paul Didelius was on the scene, monitoring and assessing the situation. Didelius noted that he had heard anecdotal reports that Walla Walla and Touchet were also hit hard.