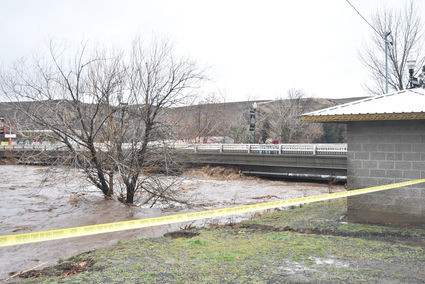 Floodwater was moving through Dayton at a good clip Friday morning, February 7, burbling at the bridge abutments as it barely slips under the Main Street Bridge at about 9 a.m.

DAYTON–A "continual stream of moisture" from the Pacific Ocean poured into the Inland Northwest last week, dumping "rain on rain on rain" onto fresh snowfall in the Blue Mountains, causing runoff which raced downstream, damaging levees, structures, roads, rail and more to a yet-to-be-estimated dollar figure in southeastern Washington.

A high-pressure ridge off the West Coast caused a stream of moisture out of the central Pacific to flow over that high-pressure ridge, then arc into southeastern Washington and northeastern Oregon, according to Dan Slagle, meteorologist with the National Weather Service in Pendleton. "It was persistent, for two or three days, and warm enough in those areas that the 4,000- to 6,000-foot elevations saw a lot of water that [normally] would've been snow. It was a continual stream of moisture."

Snow fell between 3 and 10 p.m. Tuesday, February 4, switched to rain, and it rained until about 9 a.m. on Friday, February 7, Slagle said.

Rising Touchet River and Patit Creek were noticed here Thursday afternoon, prompting the Columbia County Commissioners to call an emergency meeting at 3:30 p.m. At that meeting, they declared an emergency, setting in motion mechanisms for state and federal financial assistance.

There was no overtopping or breaches of the levee, said Chuck Eaton, Public Works Director

County and City of Dayton personnel maintained a vigil Thursday night/Friday morning. The Dayton City Council convened an emergency session at about 2 a.m., declaring an emergency at 2:14 a.m., said Mayor Zac Weatherford. The Commissioners held another emergency meeting at 7 a.m., putting the wheels in motion for state and federal help.

Eaton declined to estimate the financial impact of the damage at this point.

Muddy water was racing through Dayton, often carrying whole trees and other debris swept up in the torrent. The Touchet River was bank-to-bank and coming perilously close to the under side of the Main Street Bridge, and barely slipping underneath the rail road bridge 50 yards downstream.

Water through two main lines attached to the Main Street Bridge was cut off to isolate any contamination in case the line was damaged by floating debris, according to Mayor Weatherford and Deputy Public Works Director Rob John. The west portion of Dayton was served by the line on the walking bridge, Weatherford confirmed.

At no time was the condition of city water supplies compromised, Weatherford added. There was damage to the Wastewater Treatment Plant's outflow pipe, its manhole and the UV light system.

According to County Commissioner Ryan Rundell, interviewed Friday morning, hydrologists working with the County indicated that the Touchet River should crest or stabilize around 9 or 10 a.m.

The County issued a call for volunteers to make sandbags at 9 a.m. at Public Works. The response was "overwhelming," commented Eaton.

Deputy Public Works Director Rob John monitored a segment of the dike downstream from the rail bridge, in the vicinity of N. Cherry Street, where high water had been lapping precariously at a slight recessed part of the levee all night.

Friday morning, a County track hoe and several dump truck loads of rock were placed to shore up the low spot.

A brief surge of river flow was noted around 9:30 a.m., made visible by turbulent water violently burbling up against the rail bridge (see photo). High flows remained the rest of the day, although volume gradually receded from that point.

Bill Warren of Warren Orchards on the North Touchet estimated that about a half acre of ground was taken by the floodwaters where a weak spot from the 1996 flood was exposed, then backed up when a tree wedged in, causing erosion at a high rate.

The neighboring orchard, Nolan Empe, suffered a significant amount of floodwater flow through it, Warren noted.

Amerein said U.S. Rep. Cathy McMorris Rodgers was in contact with the BOCC, as well as state legislators Bill Jenkin, who visited Dayton on Saturday, and Rep. Skyler Rude. Representatives of both Sen. Patty Murray and Sen. Maria Cantwell were in contact, he said.

"It's still the middle of February," Amerein said, "and there is an incredible amount of snow in the Blues. We should be on our toes."

Cooperation with neighboring counties has been good, he added. Garfield County sent three vehicles and a Cat, and Walla Walla and Franklin county commissioners have been supportive.

Amerein and Weatherford both noted that the levees will require extensive work.

The Tucannon Road corridor, said Public Works Director Eaton, was hardest hit as far as county roads are concerned. "I anticipate we'll have issues there all summer," he said.

"The next phase is to see if we get FEMA federally designated," Eaton said. The county submits paperwork to FEMA and the agency will respond. 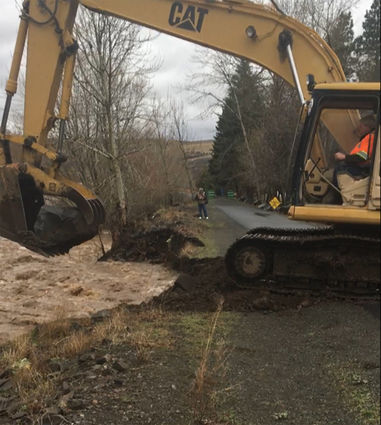 The levee through Dayton protected property from raging runoff from the Blue Mountains but, as water receded over the weekend and early this week, damage to the dike was revealed. County equipment was on hand to effect temporary repairs to this section near the Juvenile Fishing Pond. The U.S. Army Corps of Engineers has made a preliminary inspection as assessment and recovery efforts begin.

"The City recognizes the physical and emotional devastation that this flood event may have caused to those affected," said Mayor Weatherford. "As a result, the City staff has reached out to various resources including, but not limited to, Project Timothy, Salvation Army, American Red Cross, and Blue Mountain Action Council to try to come up with assistance for these residents. We are currently waiting for a response from several sources; once we have heard back from them, staff will compile a summary of their respective resources for public dissemination.

"With support from Columbia County, City staff is coordinating county-wide homeowner clean-up effort assistance with Merlin Miller of Rapid Response Team," Weatherford said. "Following Thursday's meeting, staff is hoping to have a clearer defined need for Columbia County to finalize the number of teams needed for this purpose."

Safety around flood-damaged structures is a priority, Weatherford said. "City staff is currently working towards tagging known structures damaged by the flood. This tagging asks for property owners to contact the City to schedule a building inspection.  Staff will be coordinating inspections to accommodate property owners' schedules."