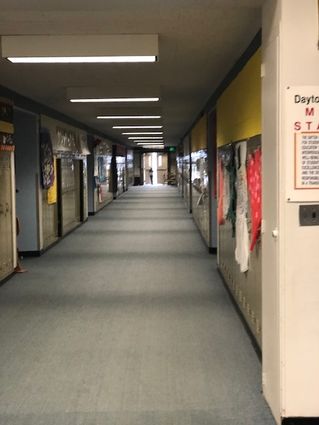 Dayton Schools students attended classes Monday, March 16, then were released for a six-week suspension of school, on Gov. Jay Inslee's orders, to combat the COVID-19 virus outbreak. Supt. Doug Johnson voiced the hope that closing schools will "play a significant role in helping stop the spread of COVID-10." Plans for remote instruction may be implemented.

DAYTON–It was a surreal day for Dayton students, staff and families on March 17, as kids went to school for the last day before the mandatory six-week school closure, due to the Novel Coronavirus pandemic. This was a direct result of the Presidential Declaration of a State of Emergency that Governor Jay Inslee responded to on March 13, 2020, with a statewide proclamation to close all schools, effective March 18–April 27. This suspension of school includes athletics, activities and clubs. Inslee has since issued proclamations restrictions groups over 50 from congregating.

"The hope is, of course, that closing the schools will play a significant role in helping stop the spread of COVID 19," said Superintendent Doug Johnson. "We are collaborating with local, regional and statewide health agencies, our local hospital and clinics, to do what we can to better the lives of others in our state."

In his letter, Johnson said that the district is looking at the possibility of online instruction for students. Some schoolwork went home with kids, but the instructional plan for the coming weeks will be solidified later this week.

He went on to stipulate "that students are not to be brought on campus for any instructional activity. This would include using our computer labs, shops, or meeting with teachers. We have been told by Washington Office of Superintendent of Public Instruction (OSPI) that graduation dates for seniors will be honored, as they have been set. In Dayton, that is June 6. It will be important for seniors to hit the ground running when we return to school and make sure they keep up with the studies from April 27 until graduation. Credits will be earned based on the work done thus far and pick up again April 27.

"The school year is likely to be extended until June 19 but the most current information tells us that other attendance requirements will be waived and no other days will need to be 'made up'," Johnson said.

The Dayton School District is looking at offering breakfast and lunches for pick-up and possible delivery to undetermined locations, to maintain the free or reduced meals that hat have been offered to students. This should be in place by Monday, March 23. Children must be present to collect.

Out of concern for the health professionals and first responders, who are also parents, limited childcare will also be provided for those families through the school for them to continue their work.

Later in the day, Monday, March 16, Johnson announced that all facilities and offices would be closed after school for the remainder of the week and the district will determine Friday the plan going forward about whether offices will be open, and staff allowed onsite.

The regularly scheduled board meeting is still planned, according to Johnson, as required by law, for Wednesday, March 18 at 6 p.m. The meeting may be conducted telephonically.