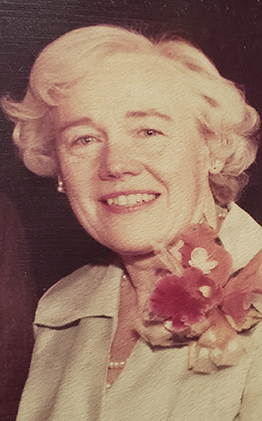 Jean Korsberg passed away among friends at Brookdale's-Torbett Memory Car in Richland, Wash., on Friday, May 15, 2020, at the age of 97 years old.

She was born to George C. and Margretha Flack on July 14, 1922, and lived in Omaha, Neb., until 1932 when the family moved to Seattle, Wash., where she graduated from Garfield High School with the Class of 1940 and attended the University of Washington, pledging the Chi Omega Sorority. Jean was an active member of the Hyack Ski Club through high school and college, and cycled many miles on the Pacific Coast and in Rainier National Park.

She married Frank Korsberg on December 11, 1042 and they had three children: Patty, Jim and Rick. Frank and Jean both loved working outdoors in the fresh air. In 1952, Frank gave up his desk job as an aeronautical engineer at Boeing and became a farmer in the Yakima Valley. During these years, Jean was an active Cub Scout Den Mother and 4-H Leader. After moving to Dayton, Wash., in 1962, she learned to sit on hard benches at her kids' multiple sporting events.

Jean was always "up" for a party, travel adventures, and skiing many different ski resorts in Washington state and Europe. After her kids were out of high school, Jean was able to take several trips throughout America and Europe. Traveling was one of the highlights of her life: on one trip Jean drove a small RV to 43 of the 45 states she visited, making friends along the way; long-time ski friends joined her on trips to Alaska and ski resorts in Europe; her sister, Barbara, often traveled along with her to Hawaii and Europe. In California, her brother, George, was her tour guide in the Frisco and Los Angeles areas, and "Aunt Jean" enjoyed her visits to Southern California with extended family members Pei Lein and Benny Miao.

Jean will be especially remembered for her devotion and dedication to family, her spirit of adventure to enjoy life, never too full for dessert or chocolate cake, and as an active member of the Dayton women's service group, Benevolentia.

A family memorial barbecue will be held later this summer.