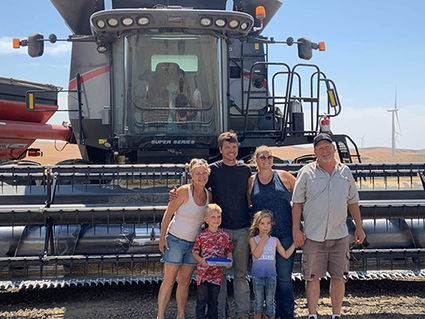 As this edition goes to press, plans are for the full crew to start with the legendary bunkhouse breakfast on July 20 and Mead Ranch Wheat Harvest 2020 will be underway.

Preparations have been in earnest in recent weeks, with machinery receiving attention, parts being run after and everybody involved getting ready-including two full-time cooks who, as in days of old, prepare three meals a day for the crew as Mead Ranch has done since, well, 1927.

"I remember getting ready for harvest when I was very young," Skip recalled. "I knew that harvest was getting close when my Dad would put his overhead pipes on his pickup.

"As I grew up," observed Skip, "I was just like any other farm kid, no different than anyone else. I did not consider it a 'legacy' until I realized I've been doing this for over 50 years."

This family's legacy got started when Skip's grandfather, Charles S. Mead, Jr., left a dairy and orchard enterprise in the Yakima Valley area to be on his own and independent.

That yearning for independence turned into and has been the Mead Ranch for nigh on 93 years, and has included all sorts of diversification through the years-cattle, hogs and sheep-to name a few. Today the family-owned operation of thousands of acres on the arid ridges and canyons of north Columbia County supports four families.

At the time in 1927, Charles S. "Chuck" Mead III, Skip's father, was four years of age, and his tenure on the ranch extended 63 years into a well-deserved retirement with his wife, Dorothy K. "Dottie" (O'Neil) Mead. Chuck Mead passed away in December, 2010, and Dottie passed away a year ago on August 1. Dottie was the daughter of Hugh "Pink" and Edith (Smith) O'Neil, one of the early publishers of the Dayton Chronicle.

In those years the couple raised three daughters and a son: the late Margaret "Mickey" Mead (1950-2017); Mary, Kay and Charles S. "Skip" Mead IV, all born in that fabulous decade, the 1950s. Chuck and Dottie reigned over the ranch lands with hard work and humor, setting a high bar of stewardship of not only the family ranch, but involvement in their county and community. Both were active and supportive of a number of civic activities and projects, and business organizations too numerous to mention through the decades.

Chuck Mead succeeded his father, and the operation has been passed on to Skip and Julia Mead, who began farming full time with Chuck in 1986. Now the ranch operations includes their son Charles S. "Charlie" Mead V, who represents the fourth generation on the land, and it's a safe bet that Charlie's and Whitney's son and daughter, Charles S. "Chase" Mead VI and Hailey, will continue the legacy.

On the several thousand acres of cropland, the primary product is wheat, with some pulse crops in rotation, and irrigated alfalfa.

When the Meads included cattle in its diversification plan, several thousand acres of pasture was employed. In earlier years, that operation was under Chuck Mead's late brother Hal, who also included a hog operation, and eventually those were phased out due to competition with Midwest U.S producers. The pasture is now leased out.

Ranch enterprises have been "fine tuned" to meet market demands and practicality restraints. But as some enterprises departed, others hove into view: placement of wind turbines along the windswept ridges and the Tucannon R.V. Park along Highway 261, which the Meads have built into a going concern.

Until last year, Skip and Julia's youngest son, Marcus, and his wife Lacey, operated Smith Hollow Farmstead, providing local businesses with fresh "farm-to-table" produce, including a large greenhouse on the place near where Smith Hollow and S.R. 261 meet. Labor difficulties eventually resulted in their enterprise closing down, and the couple have moved to Moscow, Id., where they operate a Christmas tree farm.

Mead Ranch is in the 14-inch precipitation zone of the county, and has the advantage of being one contiguous piece; moving from piece to piece doesn't involve what other operations around the area have to deal with when moving.

Skip's parents were business partners in a former Dayton business, Harvester Supply, and were partial to the AGCO-Gleaner combines. The ranch has downsized from three combines to one, an AGCO S8 Super Series with a 40-foot header. The single combine scarfs up standing grain at an astounding pace, keeping the bank-out wagon and three trucks hopping as they deliver to their nearby elevator, Relief.

"One combine does what three used to do," Skip said. "Our forefathers would be pretty impressed with what we're doing now." One story told in the family is that two tractors bought by Chuck Mead cost the same (dollar for dollar) as his father paid for the ranch.

During harvest, the crew on Mead Ranch works at having fun, Skip says, and the ranch's size has played a big role in that. "We have stayed the same size for many years and have tried to maintain ourselves at this size," Mead said. "We're fortunate enough to be able to have that ability, to stay the same size and have fun...be a little more personal.

"We're fortunate that it's all in one piece," he added. "We don't see a lot of asphalt or transportation time."

Another feature that is seen less and less these days is the Mead's harvest meal operation, which sustains the crew with three sit-down meals a day.

It begins with breakfast in the bunkhouse at 6 a.m., under the care of cooks Sy Norris and Penny Hazelbaker. A hot lunch-not sandwiches in an ice chest-is served in the field, unless wind or weather preempts. There's iced tea and cookies at 4 p.m. and a full meal at 8 p.m., says Julia Mead.

On Saturday, the operation knocks off early so the crew can have dinner with their families, and there's no work on Sunday.

This promotes a stable labor force: besides Skip and Julia, Gary Bowles has been with the ranch 22 years. His grandson, Byron Stallcop, has three years on the crew, as does Jerry Myrick. This year's rookie is Cusic Lynch.

Supporting the harvest "movers and shakers" are Charlie's wife Whitney, and kids Chase and Hailey.

Mead Ranch has kept up with the times and technology, harvesting with a modern combine scarfing up wheat with its forty-foot header and keeping a bank-out wagon and three trucks in motion. The Meads keep the elevator at Relief hopping during harvest.