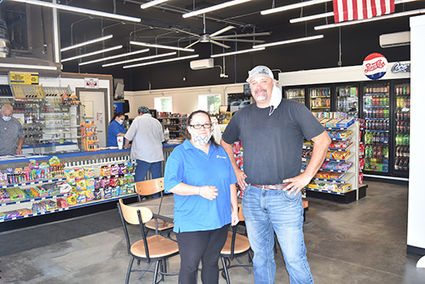 Formerly dubbed Hotspot No. 2, the newly remodeled and reconfigured convenience store will be called PFI Mart. The business, owned by Dan Hatch, right, and managed by Jessica Grigsby, converted the former shop area into an open-concept space, leaving one roll-up door for sunny summer days.

DAYTON–For the past several weeks, you may have noticed contractors bustling around the former Hot Spot No. 2 at 401 W. Main Street, including new digital signage and extensive work going on inside the former auto mechanic shop.

As of September 1, the newly remodeled and reconfigured convenience store, to be known as PFI Mart, is open for business, with a grand opening planned. The location h...