Roof project one day away from inspection 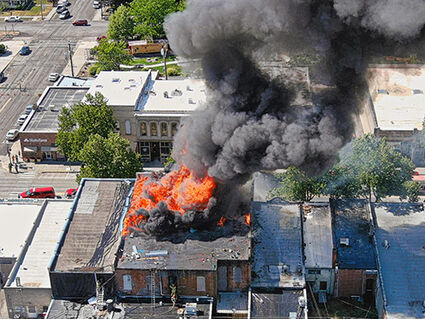 The roof and upper structure of the Eagles Aerie at 222 E. Main Street was full involved as local and mutual-aid fire units responded to attack the fire, the cause of which is under investigation as this edition of the Dayton Chronicle goes to press.

DAYTON–Members of the temporarily closed Dayton Eagles Aerie No. 2618, putting in untold volunteer hours to repair the historic building's roof, were working in preparation for a building inspection set for this Wednesday but a Tuesday afternoon fire has delivered a huge setback to the 222 E. Main Street club.

At times, roiling balls of flames and acrid smoke boiled skyward as water was blasted from street level on the Main Street side, and by firefighters clambering on the roof of the Eagles kitchen and the Woody's Bar and Grill building next door to attack the fire from that side. If the wind shifted slightly, the 200 block of downtown would be engulfed in smoke.

The cause of the blaze, which started minutes before 2 p.m. Tuesday, is under investigation, said Fire Marshal Clint Atteberry and confirmed by District 3 Chief Jeromy Phinney. As night falls Tuesday, fire units are idling on Dayton's Main Street and crews are mopping up after a three-plus hour battle, Highway 12 traffic diverted around the 200 block overnight.

Until further examination, nothing is known about additional damage to adjacent buildings, Atteberry said. "All I can say at this time is the cause is under investigation and no one was fatally injured," Atteberry said Tuesday evening.

Chief Phinney said the second-floor floor wasn't destroyed by fire, but the walls from the floor up and the roof structure is gone. "Everything supporting the top half of that wall is gone," Phinney said. A structural engineer is enroute to Dayton to assess the structure in the morning, Phinney said, but until the wall's structural integrity is determined, highway and local traffic, as well as sidewalk use, will be prohibited.

The fire was contained to the Eagles building, Phinney said. Light smoke damage and water seeping through walls on both sides was noted, he said. 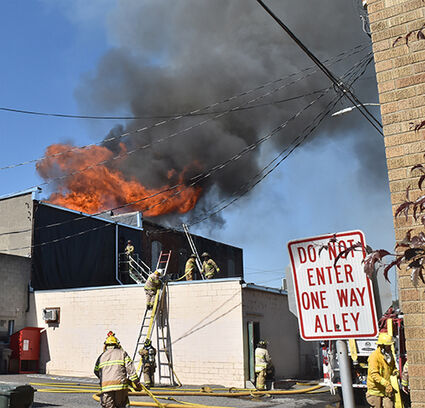 Approaching the blaze from the alley were firefighters from local agencies and Joint District 2, who laddered their way to the roof of the Eagles kitchen to attack the billowing flames, shown here at the height of the battle at about ten minutes before 3 p.m.

A small cadre of firefighters will watch the building overnight, Phinney noted.

One firefighter from a mutual-aid agency was injured, transported to the hospital, treated and released, Phinney said.

Local historian Liz Carson notes that the building may have housed Walt's Department Store prior to the Eagles Aerie occupying the ground floor. Prior to that, it was J.C. Penney store, and in the first decade of the 1900s, it may have been home to a Golden Rule store, Dayton Transfer Co. and John G. Wolfe, grocer, and later, Walt's Department Store.