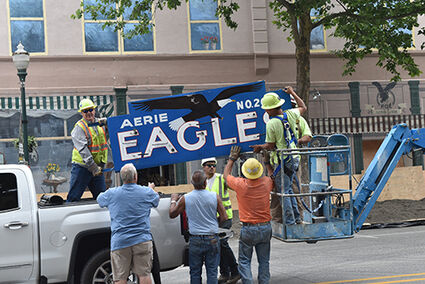 The recently refurbished Eagles neon sign is carefully lowered into the bed of a pickup by Don Jackson of Don Jackson Excavation, (in bed of pickup) his employees and members of the Eagles Aerie prior to the start of demolition work on the 1910 building's façade.

DAYTON–Officials with the Dayton Eagles Aerie No. 2618 are waiting on a reply from insurance adjustors about the claim from the Tuesday, June 8 fire that razed the second story of the 110-year-old building which caused extensive water and smoke damage, before the group can proceed with decisions as to the building's future.

Claims adjustors were on scene in the days following the fire to assess the damage and have subsequently reported to underwriters back east, said Lupe Benavides, Eagles Aerie trustee.

At this time, the future disposition of the building is not known, he said. 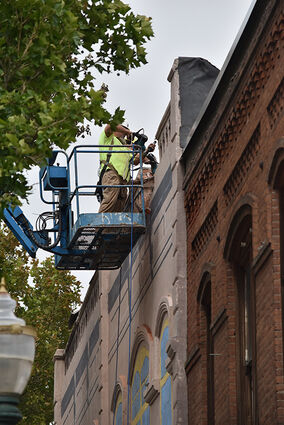 The top course of brick was carefully removed by members of the Don Jackson Excavation crew in the first steps to reducing the hazard from the fire-damaged building, according to Eagles Trustee Lupe Benavides. The goal is to reduce the hazard to enable Main Street to be opened to traffic, he said.

In the meantime, work is underway at the favorite watering hole and restaurant for the fraternities' members and guests to reduce the height of the front façade, which Benavides said might be at risk of collapsing in either direction. The work is underway mid-afternoon and evening Friday, June 11, to ensure that Main Street's State Route 12 traffic, which has been diverted since Tuesday afternoon, can eventually resume, and that the block will be safe for pedestrians and others attending All Wheels Weekend on Father's Day weekend.

A crew from Don Jackson Excavation laid plywood on the sidewalk in front of the building and applied a layer of gravel to absorb the force of falling brick during the demolition of the top portion of the façade, performed by workmen in a high-reaching manlift. This work is underway at about 2 p.m. Friday afternoon.

The fire was extinguished after it destroyed the upper story's walls and roof structure, removing any stability to the front and rear walls, according to Jeromy Phinney, District No. 3 chief.

Eagles Aerie officials have been stationed across the street, on duty to ensure that pedestrians do not endanger themselves by approaching the potentially hazardous area.

Work may continue on Saturday and possibly Monday until enough of the façade is removed that state and county officials are confident that resumption of traffic and/or sidewalk use is safe, Benavides said.