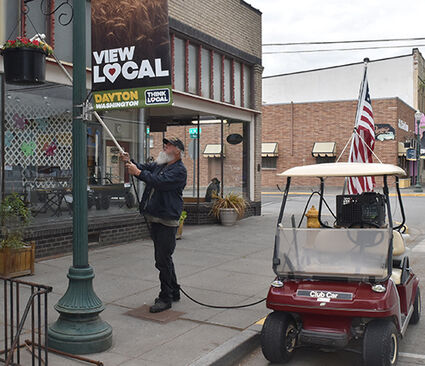 DAYTON–Have you noticed how well the hanging flower baskets in downtown Dayton have weathered the midsummer heat—especially those days of 110°+ temperatures a few weeks ago?

The credit all goes to “Mountain” Mike Mattson and, thanks to a generous benefactor in Our Fair City, the task of keeping the Main Street hanging flower pots looking beautiful is easier…and more efficient.

The colorful baskets that grace downtown lampposts from Front Street to 4th Street are part of the Dayton Downtown Development Task Force’s efforts to make the district as appealing as possible, and the flowers rely on regular watering to maintain their beautiful blooms.

Mountain Mike literally “carries the water” for the Task Force, combining his life-long habit of rising at 3 a.m. with the duty of watering the flowering baskets. Recently, Mattson’s efficiency got a boost when Roger Trump donated a golf cart to the DDTF. Matson fitted it with the water tank and away he went!

The cards speeds up the process, cutting the three-hour job down by an hour. “It’s really, really nice,” Mattson says.

“Mountain Mike,” 70, worked in the woods for area logging shows including Steve Douglas, Walker (W-4 Construction) and Jack Lane, doing any of the many different jobs in logging. He was born and raised in the Willamette Valley around Tillamook, and was gainfully employed there until the Spotted Owl brought the timber industry to a screeching halt, moving to Dayton in the late 1980s.

“I went from killing trees to watering flowers,” Mountain Mike laughed, and retired in 2013. Mattson also was employed at Threshers and Woody’s until Kurt Campbell passed away.

He’s now in his fourth year watering the downtown hanging baskets, starting with a wagon then installing the tank in a Geo Tracker.

Task Force member Bette Lou Crothers procured the donated golf cart from Roger Trump, and got it brought up to speed with a new battery and electrical.

Mattson appreciates having the job. “This really helps me out financially,” he added, “and I like doing it. I’m up at three o’clock because I’ve been doing it all my life.” Besides, in the wee hours of the morning, Mattson doesn’t have to deal with parked cars blocking his way.