Colton VanBlaricom and a Kittitas receiver go up for the football in action from the second quarter. VanBlaricom came down with the interception and broke Kittitas's chances at a three-touchdown run. The interception led to a nine-play DW scoring drive for an initial lead, but Kittitas prevailed 24-18.

WAITSBURG–Early in the fourth quarter, Dayton-Waitsburg Valley Football was first-and-goal on the four-yard line but was rebuffed by the Kittitas Coyotes, a key setback that gave the visitors a 24-18 Eastern Washington Athletic Conference win here Friday.

The winless team faces two formidable challenges in the coming weeks: this Friday at Columbia-Burbank and the following Friday hosting Tri-Cities Prep at Waitsburg. Columbia is atop the EWAC with a 4-0 league record and TCP is in second, 4-1 in league, following the Coyote's October 11 34-28 win over TCP.

"We make moments bigger than they are, and we have a hard time closing," he said. "It's the little things where we haven't been in position to win, and now we are, and we don't know how to handle it."

Dayton-Waitsburg and Kittitas seemed evenly matched as the game broke out with DW recovering Kittitas's on-side kick in good field position at the 50 and taking a giant step toward the goal line with a Monte Pettichord to Shawn Evans pass covering 29 yards to the Coyote 28.

The drive bogged down inside the 20-yard line and Kittitas took over on downs at the 15. Immediately, they coughed it up and Seamus House dropped on the ball to give DW renewed life on the 13.

Valley dug itself a hole with a holding penalty, then Pettichord threw to Evans on third down and Coyote Dawson Byers snagged the pass.

DW's defense was formidable and held Kittitas to a three-and-out. Colton VanBlaricom caught the short punt on the run and set DW up first-and-ten on the Kittitas 30.

Another step backward in a five-yard penalty was overcome by Damian Johnson's 15-yard ramble to the 22, and Pettichord's first-down run. Evans scored on a 17-yard reverse play with :30 on the clock.

Leading 6-0, DW kicked off and Josh Rosbach mishandled the ball, picked it up, and ran 88 yards for a touchdown return. Parker's PAT kick was good for a 7-6 lead with :13 to play in the first.

Kittitas again kicked onside and Bryant recovered, leading to a 28-yard run by Rosbach for a 14-6 Kittitas lead as the second quarter got underway.

Pettichord's 22-yard kick return gave DW good field position on their 42-yard line, but the snap was fumbled on second down and Kittitas's Jerome-Johnson recovered.

Kittitas moved into DW territory, but on second and 10, Rosbach was sacked by Drake Campbell making it third and 19. Rosback was intercepted by Colton VanBlaricom, whose jump-ball catch deflated the Coyotes' chances of scoring three quick touchdowns in a row.

On first down from their 20, Christian Watson-Solis, who had seen little of the ball up to this point, squirted through the defense for a 30-yard gain, the breakaway touchdown run thwarted by Kittitas's J. Skindzier.

Pettichord threw to Mason Finney eight plays later, scoring on a fourth-and-15, 21-yard pass, with one of four roughing-the-passer penalties tacked on. Though the run failed, DW was still in the hunt, 14-12.

The Coyotes took the kick deep and, thanks to a holding penalty, punted from the end zone. Dayton-Waitsburg got the ball at the Kittitas 35, in good field position to jump to the lead.

But Pettichord's throw was intercepted by Skindzier, who was evading tacklers before House slammed the door on him at the DW 43. The Coyotes moved downfield quickly with the second-quarter clock under a minute, reaching the 10. There a hold penalty snuffed the drive. Kittitas kicked a field goal as time expired for a 17-12 halftime lead.

Halftime adjustments led to the third quarter being a series of three-and-out possessions. DW suffered through mental mistakes and an interception, blocking a Coyote punt on fourth and 12 as the quarter ended.

Dayton-Waitsburg had the ball on the Kittitas 20 and was boosted by a roughing the passer and personal foul flag, spotting the ball on the four, first and goal. Hudson Reser, Watson-Solis and Pettichord all tried to punch the ball in, but Kittitas held and recovered a fourth-down fumble.

Kittitas was set back by penalties to the five, then connected big with a 55-yard gain into DW territory, the touchdown saved by VanBlaricom. Five plays later, Kittitas scored on a two-yard plunge by Byers. With the booted PAT, it was 24-12.

In Dayton-Waitsburg's final scoring drive, the team overcame a 15-yard setback, helped by a Kittitas pass-interference call. The fourth roughing-the-passer call injured freshman quarterback Pettichord but moved the pigskin to the 22-yard line. There, substitute quarterback Shawn Evans tossed to Finney for a touchdown with 3:15 remaining. The PAT was stopped and Kittitas held the lead, 24-18.

Dayton-Waitsburg's on-side kick was recovered by Kittitas. Reser caught Coyote Byers with a touchdown-saving tackle at the DW 30 and the Coyotes ran out the clock.

DW was without the services of senior lineman, 6-1, 240 lb. Tayven Seney, and 6-0, 250-lb. sophomore lineman Theo Anderson. Damian Johnson, 6-0, 165-lb. runningback, sustained a re-injury to his knee in the game when he planted a foot to make a cut and the slick turn didn't hold. 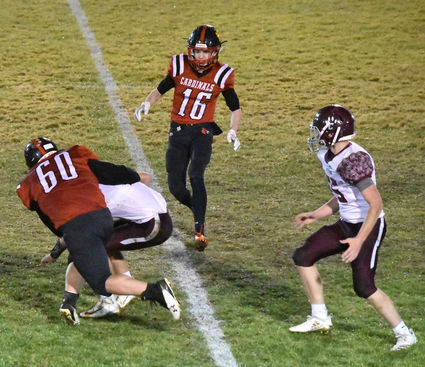