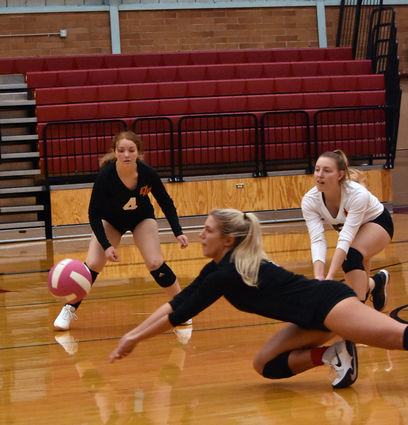 aitsburg's volleyball team stands in seventh place as the 2019 season winds down with tonight's final regular-season match against White Swan. The action starts with junior varsity at 5 p.m. followed by Senior Night ceremonies prior to the varsity match at 6 p.m.

The Lady D-Dubs faced the number one Lady Knights last Tuesday evening and dropped the match 3-0.

Leading the attack for Dayton-Waitsburg was Sadie Seney with nine kills and one block.

Teagen Larsen was the assist leader with seven, with Mackena Culley making five.

The second Homecoming-week match pitted DW against Columbia last Thursday, with the Lady Coyotes coming back from a first-set loss to hand the Lady D-Dubs a 3-1 loss. 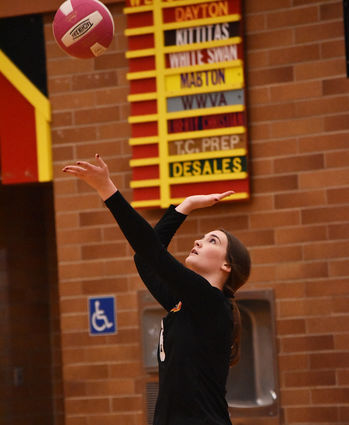 Dayton-Waitsburg server Megan Forney concentrates on a serve in the match against Walla Walla Valley Academy on October 22.

Amy Farley was in the zone with 10 kills and defensively, was a standout with four blocks.

Kailyn Lewis was tough on defense with 13 digs, and a trio of players each had 10 digs, Elise Steinhoff, Kirsten Miller and Sadie Seney. Trinity Abel made nine digs.