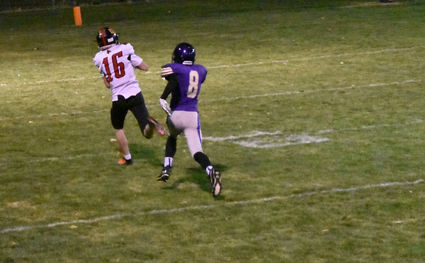 Mason Finney (16) pulls in a well-thrown pass from Dayton-Waitsburg quarterback Monte Pettichord. Finney had a step and a half ahead of his Columbia Coyote defender and the play prevented a Columbia shutout, 47-8.

BURBANK–Dayton-Waitsburg Valley Football held its own for a good portion of the first half, but Columbia's talent and depth eventually got untracked and the Coyotes handed DW its first 40-point mercy rule loss since September in a 47-8 Eastern Washington Athletic Conference counter here last Friday.

Valley Football hosts Tri-Cities Prep at Waitsburg this Friday, November 1, with kickoff at 7 p.m. It will be Senior Night and the last regular-season game. A cross-over game on November 8-opponent and location to be announced-is on the schedule.

"They came out and played great," Head Coach Troy Larsen said of the team's performance in the first quarter and part of the second. "We ran the game plan."

But a combination of Columbia's speed and power caught up with DW midway through the second quarter. "They saw in the middle of the second quarter and it's 8-0, we made a point to them 'you're in this ball game," Larsen said. "We're going to go into the half 8-0 and we're going to come out and put some pressure on this team.' It's almost like they're afraid to win. It's too easy to relax instead of just bear down and fight through something."

The 39-player team, which includes seven seniors but only two who see significant game time, is developing as the season winds down, Larsen said. "This is a building year," he said.

Blustery, gusty but dry conditions buffeted passing and kicking early in the game, but tapered off to not have an effect on either team's fortunes.

Dayton-Waitsburg was backed into their territory with Columbia's first drive, running back Creed Pariera slashing into the end zone with 7:31 to play in the first quarter and a Columbia 8-0 lead.

The Coyotes kicked back to DW and forced a three-and-out. Dayton-Waitsburg's punt put Columbia on their seven-yard line. Garcia got three carries, making first down on a fourth-and-two fake punt. The Coyotes lost the 13-yards gains by a bad snap and DW held, forcing a punt.

DW drew a Columbia offsides on third-and-ten, then Monte Pettichord connected with Dylan Bledsoe for a 17-yard gain and first down. There DW stalled, giving the ball up on downs.

Dayton-Waitsburg's defense capitalized on an Adam Puckett interception and Valley had the ball as the second quarter started.

Both teams traded possessions through most of the second quarter. DW, a Columbia punt burying them deep, wasn't able to move the ball, and punted into the wind. The Coyotes got good field position at the DW 25 yard line, but DW defense stopped them in four downs, stuffing running plays and defending the pass well.

With about two minute to play in the half, DW punted from their 32 yard line. Garcia broke a 20-yard run and Pariera, stepping in at quarterback, finished off the four-play drive with a 20-yard touchdown run with 1:47 on the clock.

Dayton-Waitsburg went three and out, punting from their 43. With 22 seconds remaining, Coyote Tyler Good dropped back and hit Pariera for a 65-yard touchdown making it 22-0 at the break.

DW kicked in the third and Columbia went three and out, Good fumbling twice and Puckett sacking the quarterback to scuttle the drive.

Unfortunately, Columbia had DW's moves dialed in and stopped each drive in the third quarter while Garcia scored two more touchdowns and the Good-Pariera connection making it 40-0 at the end of the quarter.

Dayton-Waitsburg showed some life early in the fourth. Pettichord found Bledsoe for two first downs, moving into Coyote territory to the 32 before the drive bogged down.

DW's defense held the Coyotes and Colton VanBlaricom returned the punt about 20 yards to the Columbia 42. There Pettichord hit Finney on the fly for the sole touchdown. Christian Watson-Solis punched in the extra point.

On the kickoff, Garcia sliced through DW defenders 77 yards to pay dirt and the 47-8 win. 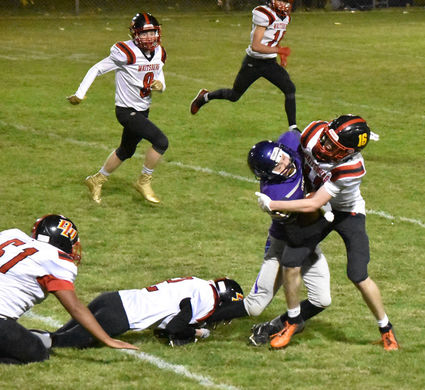