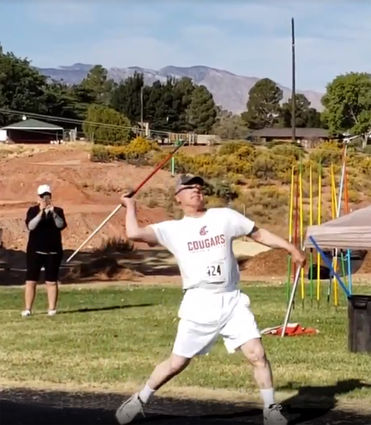 Dick Rubenser of Starbuck set a new record at the Huntsman World Senior Games in St. George, Ut., recently. He competed in the javelin, shown here, shot put and discus, setting a new all-time record in the over age 80 division with a 37.375-foot-put.

Dick Rubenser, age 81, of Starbuck, recently returned from participating in the Huntsman World Senior Games in St. George, Utah. The international, multi-sport games have been in existence since 1987. This year, the two-week event hosted 11,150 athletes competing in age brackets 50 to over 90 years.

Rubenser broke the all-time Huntsman Games shot put record for the over age 80 division with a throw of 37.375 feet. He also won the discus throw of 85.25 feet and took third in the javelin with a distance of 65.91 feet.