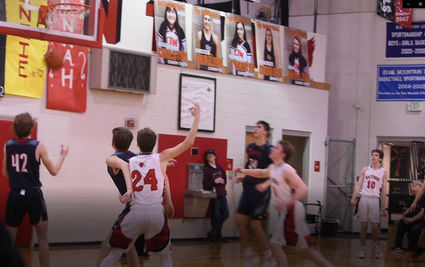 Mason Finney (10) watches the ball drop past the net with satisfaction, scoring a three-pointer just before time expired to give Dayton-Waitsburg a 50-49 victory over Liberty Christian on Kison Court Jan. 29. Teammate Dylan Bledsoe (24) signals the three pointer as he and Josiah White (5) get in position for the rebound that never came. It was the second buzzer-beating win for DW since Monte Pettichord's winner at Pomeroy Jan. 21, and Bledsoe hit a third this week in DW's 49-46 win over DeSales.

WALLA WALLA–The Dayton-Waitsburg Boys Basketball Team finished the home stretch 2019-2020 campaign with not one, not two, but three heart-pounding buzzer-beater wins, the third coming as time expired in the February 4 game at DeSales Tuesday.

DW's Dylan Bledsoe sank a three pointer with seconds to play to give the team its third cardiac win since January 21 when Monte Pettichord's long shot s...