DW Fast-pitch has trouble with Granger 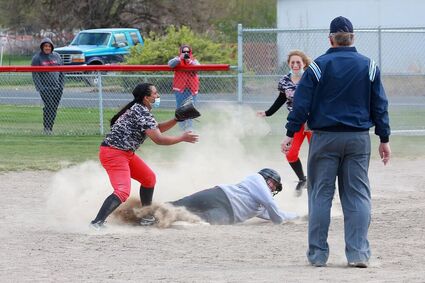 Dayton-Waitsburg pitcher Sadie Seney slides safely into second base in action from DW's game at Riverview, a 22-12 loss. Seney had eight strikeouts and had a great game pitching, according to Coach Carly Benavides.

GRANGER–Pitching by Granger's Candenas was more than the Dayton-Waitsburg Wolfpack could handle on this outing and Granger easily sliced through the double-bill with a pair of wins here April 21.

DW is looking at the final few games of the season, today, April 29, journeying to plat Cle Elum at Granger's field, then hosting TriCities Prep Saturday in Dayton and finishing the season on May 3 a...