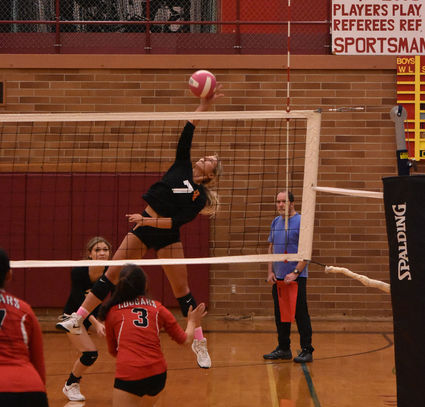 Kirsten Miller got up in the air to register one of her seven kills in the three-set win over White Swan. Teammate Kailyn Lewis is also pictured.

KITTITAS–Seventh-place Dayton-Waitsburg defeated White Swan on Senior Night October 24 to earn a play-in match and keep their EWAC playoff hopes alive, but the Kittitas-Thorp Lady Coyotes brought the season to a close Tuesday with a three-set win.

After DW celebrated Senior Night, senior Anne Miller, who had seen primarily junior varsity action during the season, was called up by Coach Brenner to serve the opening match. Miller, with help from head's up play by teammates and a few unforced errors by White Swan, served Dayton-Waitsburg to a 13-0 lead before the Lady Cougars were able to manage a side out.

On the strength of that initial jump, DW coasted to a 25-7 win in the first set.

White Swan didn't allow a repeat in the second set and it was DW's turn to commit unforced errors and drop behind. The Lady Cougars kept two or three steps ahead of Dayton-Waitsburg up through the teens until Teagan Larsen stepped into serve and the team pulled ahead 20-17.

Kailyn Lewis, playing her final senior regular-season game, served the set from 20-19 to 24-19, then Dayton-Waitsburg won set point on the next White Swan serve error.

The third set unmistakably belonged to Dayton-Waitsburg. Larsen opened serving with three straight then Kirsten Miller and Elise Steinhoff built the lead to 6-3.

White Swan's next serve was short and Mackena Culley took the lead and served Dayton-Waitsburg into a four-point lead, White Swan getting side out when Lewis's kill landed long.

Sadie Seney's kill gave DW the serve back and the Lady Cougars froze at five points after a side out then Lewis served DW to an 18-5 lead.

White Swan made a small rally in the last section of the game while servers Steinhoff, Seney and Larsen finished them off 25-13.

Anne Miller, a senior player on the junior varsity team, was brought up to varsity and served to start the match, and during her serve Dayton-Waitsburg jumped to a 13-0 lead before White Swan broke the string. DW went on to win in three sets and advance to a play-in game at Kittitas Tuesday.

"The long bus ride and many sick players did not help our performance," Brenner commented.

"The girls did take some hard hits and tried to work together but fell short," she added. "Our season is over but we finished with life-long friendships."